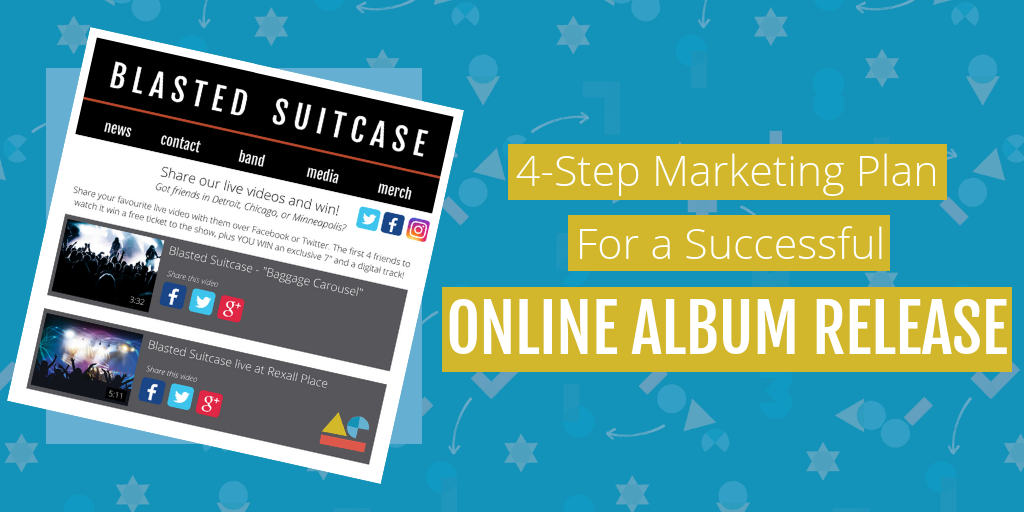 Here’s a true story of how an independent Canadian record label successfully released a new album online, found their best social media fans and generated thousands of plays on Spotify. They promoted their music online using social media and we simplified it down to a 4-step marketing plan that you can implement immediately. Read on!

When an independent Canadian record label signed up for AE, they knew they needed help promoting their new album.

The main objectives for their online album release were twofold. First, to increase awareness for their new album. And second, to get more fan engagement compared to past campaigns, but spend less time.

Promoting Your Music Online in 4-Steps

In the case of this successful independent record label, the label set up a roadmap of 4 steps to reach their goals:

Before you get started on these steps, you need to know how you will track and report on your marketing campaign. If you’re not tracking your tactics, you’re bound to waste time with techniques that don’t work for your specific audience.

It is important to also benchmark your current social metrics pre-campaign. Then track the engagement on each of your social platforms during the campaign, as well as after it.

Remember – tracking your campaigns gives you an edge. You can leverage everything you learn to make each new campaign more successful.

This first stage is where you identify and reach out to your top fans. You can do this manually, or by automation, depending on how large your fan-base is.

In this case, the record label reached out to the band’s fans through their website, asking them to like their favorite YouTube videos of the band.

They made it quick and easy and were able to quickly identify their most engaged fans by doing this. Psst — just so you know, this is a true story but Blasted Suitcase isn’t the band’s real name. We’ve gone undercover to protect the super-secret identity of the actual band involved in the campaign.

In this next stage, entice your fans to take another step in engaging with your brand, using a reward, incentive or positive feedback.

For example, after Blasted Suitcase fans liked their favourite YouTube videos, they got a next-step ask.

Fans were incentivized to share videos with their friends over social media – but only to friends in the geographical areas where the band would be on tour. (In this case, it was Detroit, Chicago, and Minneapolis.)

The band gave away 4 tickets per show, as well as a limited edition 7” single of their most popular song.

Using the right incentives and rewards to resonate with fans is a key part of the strategy. The free tickets allowed the label to promote the album release with ticket giveaways while the band was on tour.

By discovering which fans were actively engaging with the band’s content, they were able to double-down on those folks and get them to continue to share and talk about their content.

(For example, a fan who won tickets to a show would be likely to share several times about it on social.)

Behind the scenes, the record label measured and tracked which fans were engaging in these first two steps. Through that, they built a set list of fans that they could rely on to be brand advocates. Motivate fans to engage with your brand using a reward, incentive or positive feedback. Track the fans that do the most- these are your influencers!

This stage of the marketing plan is all about further activating and promoting the band. In this case, the activation portion involved having the fans continue to share content for an opportunity to win the free tickets.

After playing the shared video, fans were given the option to “like” it or tweet the page for free tickets to the live show.

What this strategy did was create a mad rush for fans to be the first four to like the page and claim the free tickets.

The high level of activity naturally created ongoing curiosity and awareness of the band in the different geographies. By the time the band was reaching their final stop in the tour, they had amassed millions of views because of the engagement from the campaign.

For the fans who missed out on the free tickets, the band provided discounted rates for an immediate purchase, as well as emails with the same incentive to buy tickets to their local show. This maximized the return that the record label was getting for every fan, and even rewarded the fans who did not win the free tickets. This is the final stage your marketing plan. This is where you need to analyze and report on what worked and what didn’t in the online album release.

This provided a ton of useful data about the band’s fan base. Now that you have this data, you can answer important questions like: Who are my super fans? What social platforms are they most active on? Which of my videos was shared the most? And so on.

But there’s only so much you can track manually….Enter AE.

The Technology Behind this Successful Online Album Release

When you consider that social media is the #1 driver of activity for the music industry, not being able to easily streamline and report on online music promotions is a major problem.

Not surprisingly, when this record label found out what AE does, they wanted to make it part of their music marketing strategy.

AE’s data-crunching engine was at the center of all the fan engagement and helped the label coordinate the social engagement, email campaigns, and fan offers.

In the first step (“the gathering”), the band’s AE integration was in a popup that asked fans to like their YouTube videos. This got fans involved and performing activities that would generate buzz around the band.

In the next stages, the label could see behind the scenes of the campaign. In their AE Dashboard, they could see how often the fans shared the videos, and other ways the fans interacted. They could also quickly see which fans were in the right geographical areas to target.

In the maximizing exposure stage, AE was used to connect with fans who didn’t win the initial four free tickets. Rather than have these fans feel like sore losers at the end of the contest, they were given the chance to purchase exclusive discounted tickets. AE was the secret sauce in this effective email re-marketing campaign.

In terms of tracking, analyzing and reporting, the band had this in the bag. They used AE to get a dashboard that streamlined the entire reporting process.

The record label was instantly able to see what the fans were doing, what the strongest geographies were, and other information that could be leveraged for future campaigns.

Additionally, AE’s strong tracking features enabled this record label to have a dynamically updated leaderboard showing which fans were the top-ranked, based on how much content they shared during the campaign. This is an example of the kind of activity that AE tracks.

This 4-step marketing plan was integral to the success of the band’s online album release.

Maximizing fan engagement and exposure was only one piece of the puzzle though. The ability to record fan data through AE’s social login was key.

AE’s login provided accurate, real-time data that helped the marketing team to understand the contest’s entrants. And this is data that they continued to use for future email marketing and campaigns!

Feeling Under The Gun?

Sure, you can track your own fan data using spreadsheets and docs. But what digital marketer actually has time for that?

Let AE Help You Save Time & Get Better Campaign Performance