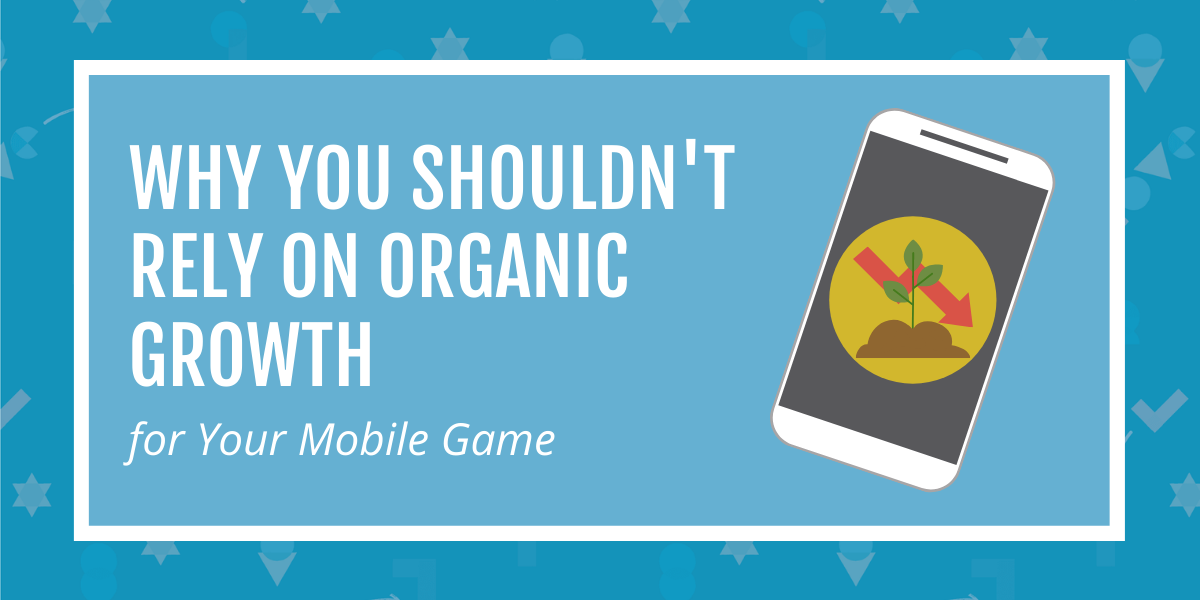 Like you, developers are coming up with exciting new games each year. But not all of them fare very well. In fact, 30% receive less than 5000 installs. Essentially, that means all the hard work put into developing the game goes to waste, with very few people ever playing it.

And that’s by no means because of a lack of interest in video games. Quite the opposite, in fact. As much as 70% of iOS revenue is generated through games, with 2020 alone showing over 40% growth for the market.

So a highly engaged market exists for your mobile game. But the key to making that matter lies in effective promotion.

In an ideal world, things would be simpler. You’d just need to have a fresh, exciting concept for your game and the next step from there would be to place it onto the market, where it would catch on by its own merit. This way of acquiring users, known as organic growth, simply doesn’t work anymore.

There are too many apps on the stores – 2.87 million on Google Play and 1.96 million available for iOS. With a saturated market like that, even the most novel concepts are bound to have trouble generating any real interest.

Pair that with massive differences in segmentation across the user base over the years, and you quickly realize that user acquisition has become a completely different process. It now requires much better strategy, leveraging modern targeting tools and altogether doing away with the idea of depending solely on organic growth.

Organic Growth is an Asymmetric Game

By its nature, organic growth is asymmetric. That means, to beat the odds and create a strategy that gets tangible results, you’ll have to invest a lot of time and effort. However, at best, you’ll be waiting between six and nine months before you break even. And that’s in exceptionally rare cases.

One of the organic growth methods that’s talked about often is search optimization. While it’s true that you’ll need to make sure that your app is easily discoverable through search, you can’t count on that method alone to bring you users. Not only does it take time to rank through search, but massive competition online makes this a method that often doesn’t give returns for the effort you invest.

In trying to rank through search, it’s possible you may end up harming the first impression a potential user gets after finding your game. That’s especially true if you resort to overusing the keyword you’re trying to rank for, effectively making the description of the game both unreadable and unappealing. Organic Content Marketing for Mobile Games Has a History of Underperforming

Creating content for your game so it can build an audience is a great way to broaden its online presence. It allows you to siphon users from multiple channels and, over time, move them down the pipeline to eventually become users. The trouble is that it’s a notoriously tricky method to implement for mobile games.

People generally don’t conduct a lot of research before deciding to download an app. It’s usually something they do on an impulse, mostly because of the overall low investment that goes into it. If your game has a price tag, that may be slightly different, but you still won’t be seeing inbound traffic. So this cornerstone of organic growth is one you can rule out if you want something that’s a little more certain to give you a return. Or effective at all.

There are critical opportunities for your game within its lifecycle.

To take advantage of all the hidden opportunities, you’ll also need to be able to look into opportunities for maximizing acquisition on a user-by-user basis.

Organic growth strategies don’t give you access to the essential data that makes this possible—such as how many times a user comes across your mobile game before installing (impressions), the kind of placement that’s likely to get you the best results and other factors.

For all of these details, which you can then use to inform a more targeted and data-driven campaign, you’ll need to look into targeted campaigns.

Installs of games through inorganic channels have been showing a trend of steady growth. Over the course of 2020, however, that growth has taken a sharp upturn.

According to this report from AppsFlyer, the total installs that have come through inorganic channels is increasing year-over-year for every type of mobile game:

Your game may cater to a specific player persona, whether that is a casual, competitive or one of the myriad of other categories you could segment gamers into. Whichever grouping it is, you’ll want to make sure you’re putting your game in front of exactly those people.

That’s an intelligent way of maximizing your user acquisition, and it allows you to carefully adapt your strategy at different steps along the way. You can more easily tell which strategies work for the exact users you are targeting.

Another factor that’s just as important is that targeting specific users helps you get data that’s more accurate. Organic campaigns may get more eyes on the game, but that’s no good if not many of them are proceeding to the installation process.

The data you receive from targeting your campaigns tends to be more actionable, since it comprises people who are likely to take action. All that’s needed is a few tweaks. Broad, unsegmented data tends to be much less useful, providing larger numbers but little that can be done with them. Your mobile game may also appeal to a multitude of player personas. For this, non-organic growth also helps. It allows you to craft different, co-running user acquisition funnels, all optimized for the different players you’re trying to target.

The company Dots used a similar strategy for their mobile gaming, enabling them to grow revenue by 33%. Through targeting the different types of players they were hoping to get with specially optimized messaging, they were able to improve acquisition across different segments.

Creating that kind of resonance while relying solely on organic reach requires far more resources and is significantly more challenging.

Paid campaigns offer an opportunity to put your mobile game in front of a large number of people, many of whom will be ready to give it a try. Even better, they offer a chance to present the game in a way that piques the interest of a potential user and engages them. That can be a difficult thing to achieve if you’re expecting your target audience to come across your app and actively seek out what might make it interesting to them.

In other words, inorganic campaigns make it possible for you to put your best foot forward and grip a potential user’s attention. That’s largely because of the variety of media types you can use to target customers.

With videos, you can display the mechanics of your game and how it works in a short and simple way, giving potential users greater motivation to play it. It’s far better and more effective for them to see the game in action. You can also use it as a means to display the graphical fidelity of the game, with subtitles to make the video more accessible to users in a wide range of situations.

On Facebook, for example, there are over 8 billion videos watched every day. And 63% of content viewed on mobile is video. That means people on Facebook are highly interested in consuming video content. But it also means that there is a lot of competition to contend with before a promotional video for your mobile can gain traction.

Paid advertising is the most effective way to solve that.

Especially for mobile games, playable ads can be a good way to get a potential user’s attention while showing what’s special about your game. The top 100 grossing app developers are looking at it as a way of enhancing user acquisition because of its effectiveness, according to a survey carried out by Adcolony.

The survey also shows that some of the historically popular forms of paid acquisition are falling behind playable ads, at least with regard to how favorably app marketers are viewing them.

Paid advertising makes it possible for you to gather social proof, and that’s a critical element of scaling the users of your mobile game. As many as 50% of mobile users don’t consider an app with a rating of less than 3 stars. And people generally expect to see at least one review before they decide to download an app.

That means if your app is slow to gain traction and gather reviews, that can create a negative feedback loop in which other potential users see it and, because of the lack of reviews, decide it’s not worth their time.

Through a paid campaign, you can get instant results that give your app the social proof it needs to attract more users. That knock-on can help create a successful launch for your mobile game, while also opening up possibilities of compound growth.

Before launching a paid or targeted campaign, you’ll understandably want to know the campaign will more than pay for itself.

This study by AppsFlyer shows detailed return on an ad spend (ROAS) for mobile games in several regions of the world. In the most lucrative markets, including South Korea, Vietnam and the UK, returns are all floating above 35%. And in the US and Germany, the returns of over 20% are nothing to scoff at.

The data shows that, across the board, investing in inorganic growth is among the best paths to ensuring the profitability of a mobile game. Organic growth, needing much more effort and a sustained investment before producing measurable returns, is a far less appealing route to take. On the whole, it may also be less worthwhile.

One of the problems with organic growth is that it can be difficult and slow to measure. The delay, which is altogether absent when you’re using targeted campaigns, can cause you to lose valuable insights. And when you do get data that you can evaluate to see what’s feeding into the growth of your mobile game, many variables may have shifted in the meantime—affecting the usability of any patterns you spot.

Targeted campaigns, on the other hand, give you fresh, real-time analytics. The swift feedback is crucial for knowing what to tweak for better results, in time for it to make a difference. You’re also able to quickly pick out issues that may affect the success of your campaign, and fix them before they have time to do severe damage.

As far as your mobile game, organic vs inorganic growth is a settled debate. If you stake it all on organic growth, returns will be slow to come, if at all they do. But with inorganic campaigns, you can create an effective user acquisition strategy that leverages today’s mobile gaming landscape.

While strategies differ according to the type of game and specifics about the intended user base, the overall trend is that inorganic reach is a far safer bet than organic. Inorganic growth campaigns also offer greater variety for promotion methods, letting you promote your game in ways that are precision-designed to connect.

Appreciation Engine is all about hyper-personalized marketing. Let us show you how you can precision target the audience for your mobile game.

I'm a co-founder and CMO at AE. I believe that truly successful internet businesses have to connect people. {wave} When I'm not online I'm exploring beautiful Vancouver Island. Things I love: everything scifi, literary fiction, coffee, YouTube Music, my workhorse sewing machine and board games.
← The Importance of Lookalike Audiences in Your Mobile Game Marketing Strategy