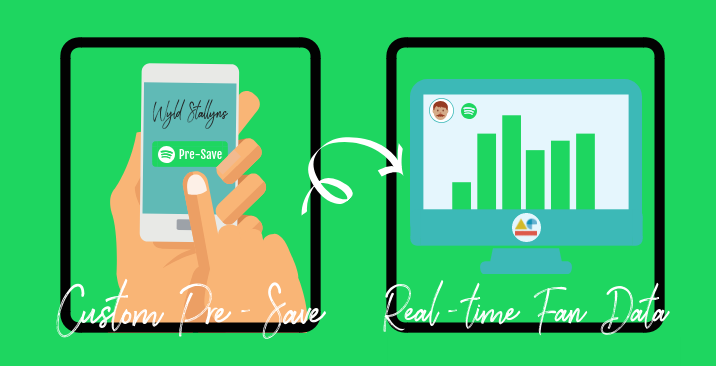 Our custom Spotify buttons may look like the rest. But under that green hood, they are powered by AE’s data crunching engine. Now you can build up your fan list, gather Spotify Analytics, segment with precision, and expertly target your next campaign- all with one button!

What is Spotify Pre-save?

Since its release, the Spotify Pre-Save button has had a ripple effect throughout the world of online music promotion.

With a simple click of a button, fans are able to add not-yet-released music to their Spotify library, giving them instant access the moment it becomes available. Fans don’t have to worry about missing an exciting new release, and labels get an immediate boost to their streams. This first week streaming activity can also impact whether or not you get on Spotify playlists.

All in all, this tiny button has been a game changer for modern music artists. But at the same time, something huge has been missing… We knew we could take the Spotify Pre-Save button to the next level. Gathering customer data and making it actionable is AE’s forte.

The problem with other Spotify buttons on the market is that they are only a link from website to Spotify.

We wanted to give artists the ability to own their fan data and to use it to create more meaningful connections with their fans. So we went out and did just that.

AE’s custom Spotify Pre-Save button is one of a kind. We’re the only service that lets you see what your fan is streaming– with their permission! Think about the kind of precision targeting you can do when you know a fan has already listened to your single or just put one of your artists in heavy rotation.

Now you’re engaging fans and gathering customer data all at the same time!

Custom Built for You

Not only can you create a Spotify Pre-Save button but you can also create all the Spotify action buttons, including Follow Artist, Follow Playlist, and Add Track!

These buttons are going to change the way you run campaigns.

And the best part? They are dead easy to add to your website or campaign page. No need to hire a team of developers, just plug in our code and watch the data roll in.

More Data Than Any Other Solution

You need lots of streaming data and that’s where AE can help. We offer the most social login options for streaming services.

I'm AE's jack-of-all-trades marketer. I'm a part of everything from social media to analytics to sales. My passions include videography, the arts, and growing food.
← November Pop Culture Picks